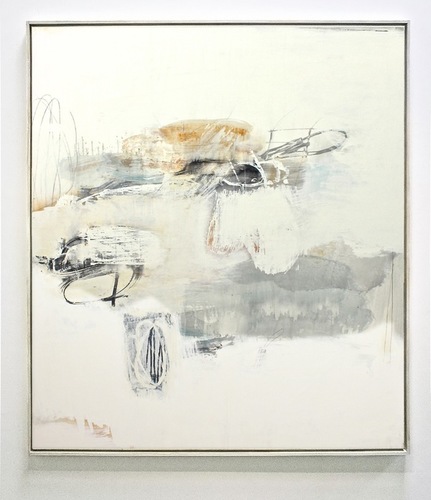 There’s a lot of what might seem to be available real estate in Robert Kingston’s “New Paintings,” at Randall Scott Projects. From a distance, the California artist’s large abstractions appear wide open, with light areas that resemble raw canvas. Actually, every millimeter is painted, although often with washes so thin that the fabric’s texture is visible. The pictures possess multiple levels, with underpainted regions that show through, whether strongly or faintly. Flashes of color, geometric forms and pencil doodles also punctuate the predominantly ivory- or sand-colored fields.

Scott showed a few of Kingston’s bigger canvases in a group show last summer, and this selection continues in that style, simultaneously earthy and airy. As they were before, the larger works are contrasted by the smaller ones of the “Montauk Painting” series, which usually feature a darker palette and simpler formats. The vaster paintings have a certain kinship with prints, and that affinity is even stronger in such foot-high pictures as “Montauk Painting No. 4.” Mostly black with a bold few strokes of white, and discreet gray stripes down the sides, the picture echoes East Asian ink paintings and calligraphy.

Although clearly just as intuitive as the larger paintings, the smaller ones are more direct and more tightly focused. If the big pictures’ discontinuous compositions recall Cy Twombly, “Montauk Painting No. 3” suggests Piet Mondrian without primary colors or a straightedge. It uses a loosely painted black cross to divide blocks of grass green and sky blue.

Kingston lives in Los Angeles County, in the foothills of the San Gabriel Mountains — a long way from Hollywood. That locale and the desert hues hint that his paintings are, in a way, landscapes. But they’re also construction projects, beginning with a single gesture. The artist adds, yet also subtracts, erasing small marks and burying whole regions under shades of white (including, sometimes, latex house paint). The archaeologist of his own work, Kingston builds, buries, unearths and builds some more. All that real estate, it turns out, is carefully considered and fully claimed.