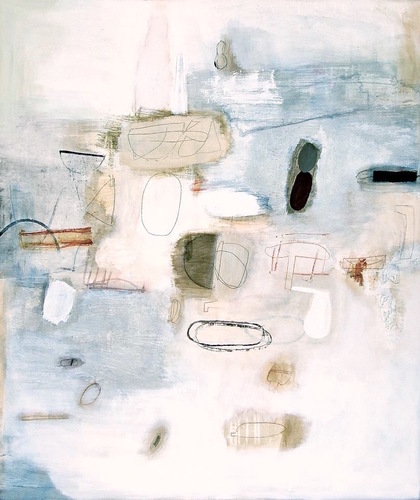 If painter Robert Kingston were a poet, readers might associate his work less with the cerebral machinations of a T.S. Eliot, or the personal confessions of a Robert Lowell. One might, however, align him with the soulfully sensitive “Projective Verse” eruptions of Charles Olson, Robert Creeley and Robert Duncan. That group established the poetry component and cornerstone at the once vital but now defunct avant-garde, North Carolina-based art school called Black Mountain College. They felt that their poetic lines unfolded into the metaphorical ‘open field’ of the blank page and were driven into creation via the cadence and duration of breathing itself. These poets, like their Abstract Expressionist forebears, stood committed to producing a process-oriented art from the center of their bodies. The late Cy Twombly might stand as a painter-practitioner of this, if not a similar aesthetic. Not surprisingly, people often position Kingston’s work alongside Twombly’s.

In these new, large-scale paintings Kingston treads the same painterly path of lyrical abstraction that has resulted in a series of highly regarded exhibitions stretching back over the last twenty-five years. Kingston has stated that for him, each painting begins with “... making a random mark” on a gessoed canvas, an act or projection which instantly engages him in an intense yet playful conversation with both his space and materials (mostly acrylic paint, but sometimes including white house paint and graphite pencil on canvas). His process involves smearing, scribbling, layering, and erasing. Through it, the artist builds textured surfaces that feel like visceral and woven atmospheres, through which painted fragments of various densities weave and wander like birds flying through clouds or boats bobbing among waves.

Questions of finished or unfinished become mute if not meaningless when considering a Kingston painting, in part because the artist’s bountiful fountain of images command such intense visual consideration in and of themselves that while looking at one portion of a canvas, the rest of the painting might collapse into a kind of humming blur. Furthermore, though painterly in the modernist manner of Matisse and Diebenkorn, Kingston’s canvases also direct a trompe d’oeil nod to a Schwitters or a Rauschenberg-type assemblage. Therefore a patch of smeared black paint in one of these Kingston paintings alludes to a piece of pasted newsprint, while a swatch of cadmium blue becomes a “framed” and metaphorical section of the ocean in another.


Of course, each painting’s “sections” never fail to resolve themselves into balanced and integrated wholes. Yet feeling in Kingston’s work doesn’t straddle archetypes or express opposite ideas simultaneously. Rather the emotions of each canvas unfold sequentially and coexist comfortably next to one another. Therefore some whimsically doodled lines of graphite dance with a tangent patch of rugged paint in one painting, while a veiled dreamscape visible through layers of light wash along with a vivid and brightly painted suggestion of a stout forest dot the virtual geography of another.

The attentive and receptive viewer will find here same kind of masterly execution, ripe imagination and fearless optimism that Kingston has exhibited throughout what has steadily evolved into a distinguished body of work.